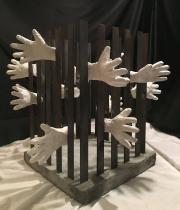 I am a first-generation American. My parents were exiled during the Soviet Union and we were lucky that they were offered to work for the American government in Germany. More than a decade ago I arrived in Vermont, fleeing an abusive relationship with nothing but my son and three suitcases to my name. Twice my family has sought refuge in America, twice we were welcomed with open arms. We were lucky.

Now I am a Vermont artist, art teacher, and graphic designer and I am appalled by the conditions asylum seekers and immigrants are faced with. Asking for asylum is not a crime. It never warrants separating children from their parents. Parents do not uproot their children and themselves lightheartedly, I know this. I cannot imagine a worse fate than traveling for days and weeks, with nothing but hope in your heart, and then being separated from your loved ones, put in appalling jail like criminals and then hearing of the death of your child. We as a nation cannot continue with this inhumane treatment.

As a Jew I grew up with the knowledge of the Holocaust and visiting memorials. Memorials that were meant to remind us of what had happened so we should never repeat. I am working on a memorial to commemorate all those who perished in the immigration detention centers. I recently finished the model to it. I am hoping to build a large scale memorial and put it up in a prominent place. My memorial is meant to remind us of the suffering that is happening right now and give hope to those who suffer. I want my memorial to be seen and promote the abolishment of immigration detention centers.